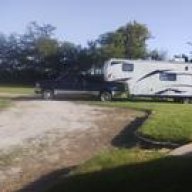 over the last 2 years, i have adjusted the steering gear box 5 times. the truck had the best steering out of any ford diesel i had owned to date. i purchased the truck with 80k miles on it. the previous owner bought it to tow his fifthwheel only and i use it the same or 90% of the time. with only 142k miles it was possible the steering gear box was worn as each time i adjusted it , it did help some.

back in may we made a trip to mt rushmore south dakota and fought some wind. the truck def had some play in the steering but was manageable. the trip home started to get more interesting in the wind pulling the hills. i decided it was time to put some more money into the truck. i bought a blue top steering gear box and oddly enough, ford still offered a new steering shaft. when when i installed the sxe and t4 kit, the left boost tube is a tight fit around the ps pump. it had rubbed on the cap and rocked one side up and dumped the atf all over the the rag joint. i know thats not the correct term for that joint but the only one i know right now. with a 23 year old puck, i thought maybe that softened the puck and decided to replace it as well. while the steering box is out is a great time to do the shaft. called oreilly's, a local auto parts store, they had 2 by dorman in stock! $100 cheaper but this truck has been such a princess with aftermarket parts i opted for the motocraft at $300 with our shop discount. i had already replaced all the steering linkages as well as wheel bearings. that made a difference but not all of it.

so with both shops full. no time or space to get the job done i paid a local shop i know and trust. $650 labor , fluids and alignment. i was thinking $400 to $500 but it is what it is and it's done. turned out that the steering shaft was the majority of the issue. i took a short video with my cell phone and it was a quick one as i was still at work. there is a bushing inside the upper shaft that is splined like the lower shaft. it has 5 cracks in it that would expand and get sloppy. the section of the shaft that the bushing had ridden on the last 23 years ( rounding up) had worn a bit as well. if you pulled the shaft open or closed it 3" it was solid again. the puck had some play but not much. the u joint has some play and a tad more then the puck. the splined shaft was the worst but it all adds up and in the video you can see how much. with the leverage from the tires and to the steering wheel it had to be a bit more.

thought i would share this in case someone else had a similar issue.

That is a lot of play, dang. Never thought to check mine.

Thank you for sharing.

i didnt know there was a bushing inside that could wear like that. i was just assuming that rag joint was probably worn.
F

Good find! What prompted you to replace the shaft in the first place? I have never even considered it. 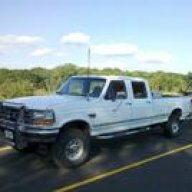 I know some also replace with a borgeson steering shaft that isn't susceptible to some of this type of play. I haven't done it myself yet, but the steering has gotten looser, so likely will in the future.

fastersteve said:
Good find! What prompted you to replace the shaft in the first place? I have never even considered it.
Click to expand...

i had replaced all the steering components and that helped but wasn't it. adjusted the oem steering box 5 times and helped but wasn't it. problem seemed to progressively loosening up and especially felt with a 30' camper in tow. i decided to replace the steering gear box with a blue top. i did not look at that center point on the steering shaft but you can view it with a flash light or an inspection cam if you have one. i had already ordered the blue top and recieved it. i had my wife bump the steering wheel and noticed the shaft itself looked sloppy so i called ford and a local parts store. both had them in stock and that can only mean one thing! looks like the same shaft was used for several years. here is a higher res version of that video above. select 1080p and full screen and you can see that bushing split and how much flex there is.

jschildm said:
I know some also replace with a borgeson steering shaft that isn't susceptible to some of this type of play. I haven't done it myself yet, but the steering has gotten looser, so likely will in the future.
Click to expand...

i considered one of there shafts but i didnt know how much additional vibration was transmitted through there shafts and was in a time crunch. ford had one in stock so i went back with oem. i just turned 142k miles on this truck so and i have noticed this problem steadily getting worse the last 2 years. an oem should last another 140k miles imo. i bet the borgenson removes all the play the stock shaft has ! the oem def will have a small amount due to bushings etc etc vs the borgenson.

i drove the truck yesterday and between the blue top gear box and the new steering shaft it is rock solid!

here are 3 pics, one of the pn# on the original steering shaft and one of the pn# on the sticker of the replacement shaft. the new ford shaft is visually built differently and a tad heavier then the original. i decided to cut the old shaft in half just to look at it. shaft cut in half pic is not a great one but you can see the clean shiny section below the plastic coating on the shaft. that shiny spot is where the metal on metal wore the splined shaft itself. 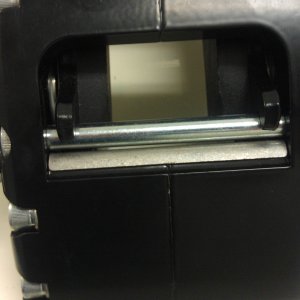 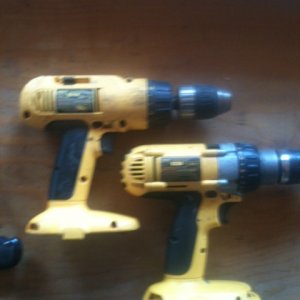 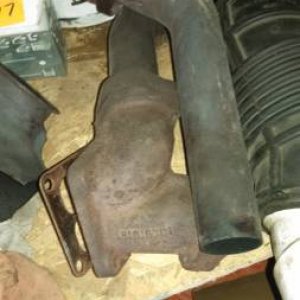 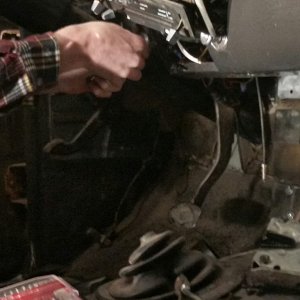 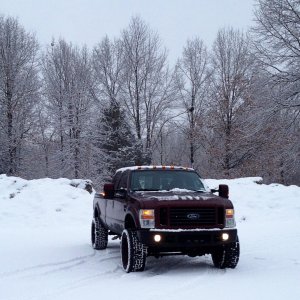 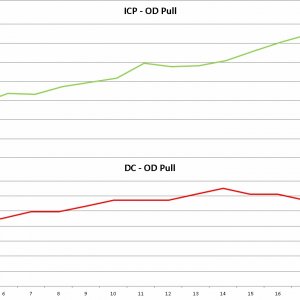 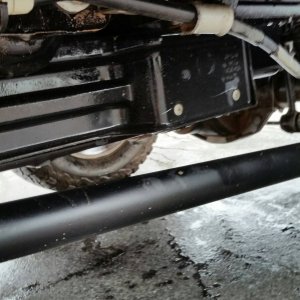 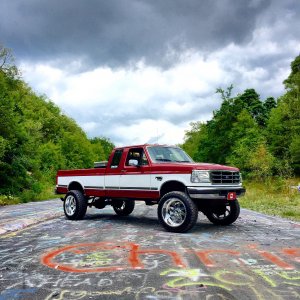 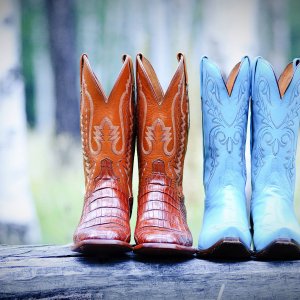 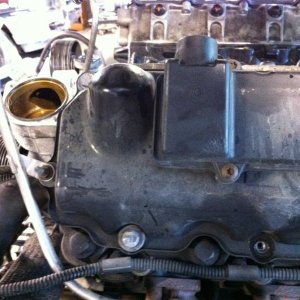 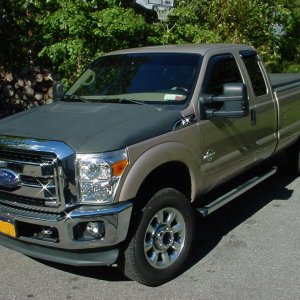 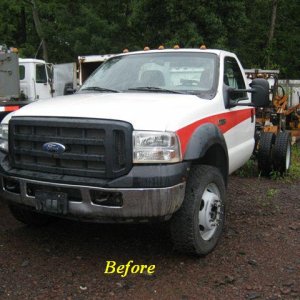